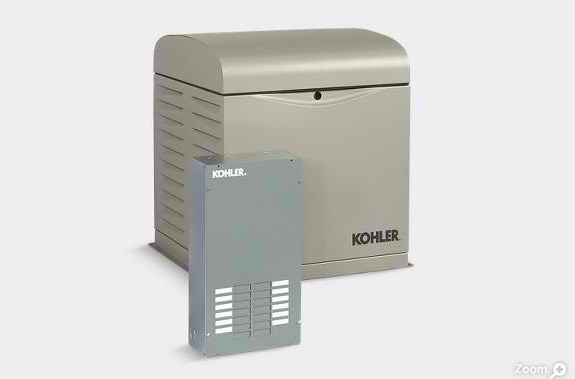 KOHLER generators for backup power provide reliability and performance. When you lose power during an outage or storm, a hard-working 8 kW KOHLER® generator keeps your appliances working, the heat or AC running and your security system on.* OnCue® Plus Generator Management System is standard with every RESV or RESVL generator.

The Kohler 8 kW generator can easily start and run a 4 ton air conditioner with up to 5 kW preload.*

Kohler is known for extraordinary reliability and performance and backs that up with a 5-year or 2000 hour limited warranty.

Every 8RESVL comes standard with OnCue® Plus, our remote monitoring system, which gives you peace of mind at home no matter where you are in the world.

The Power You Need

The Convenience You Expect 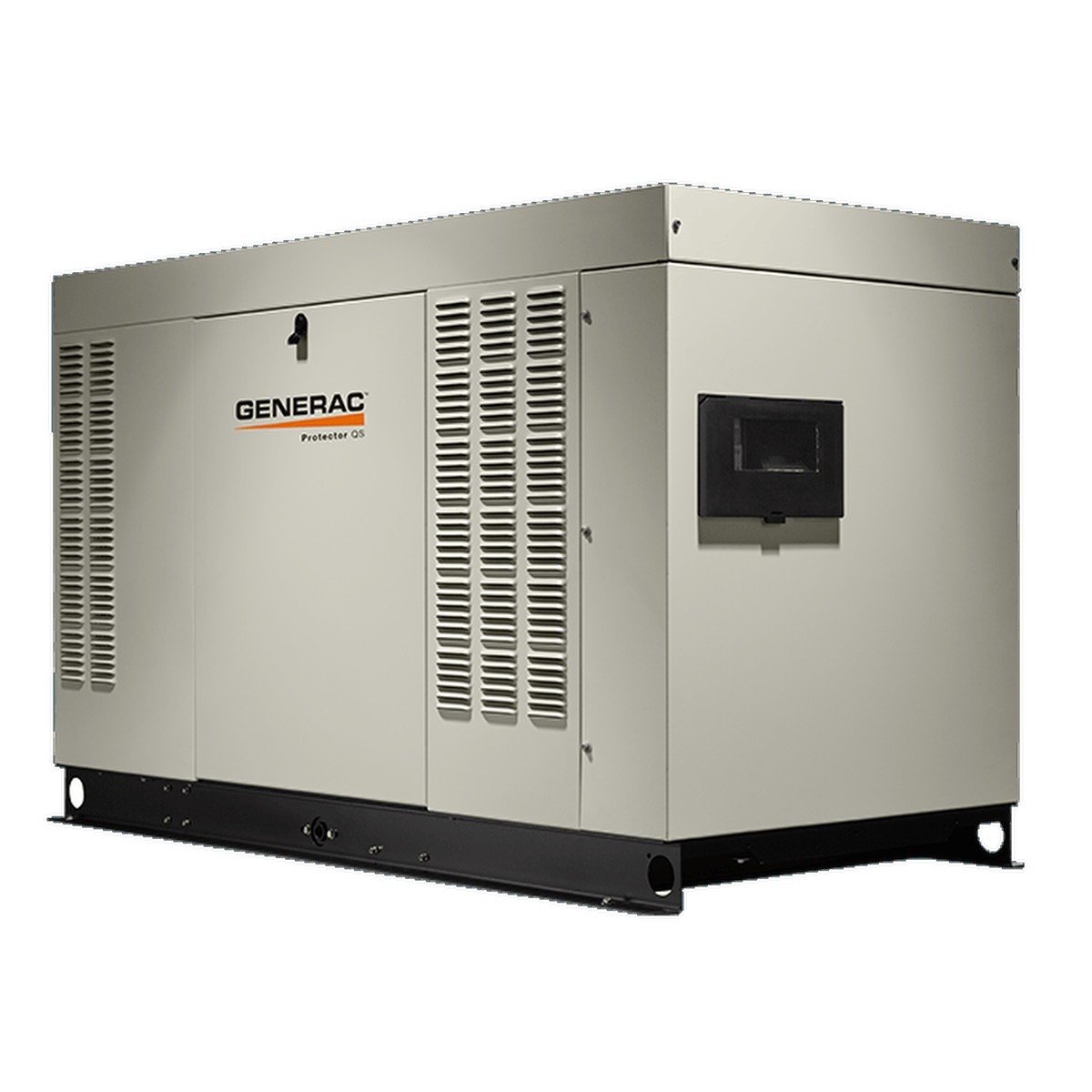 While online and automated banking technology is great, people still need to interact with tellers and bankers in branch locations often. Customers meet with bankers to apply for loans, open accounts, and seek financial advice. Many people bring in cash tips and change jars to be counted and deposited. While you can make a deposit or cash a check at an ATM, many people would rather do it face to face with a teller. Account holders also rely on direct deposits and other automated services to go through, and electricity is required to do that.

What Happens When Banks Lose Power

When banks lose power, they cannot process deposits. Customers who want to cash a check, make a large cash deposit, or withdraw funds (from an ATM or with a teller) are out of luck. Loan application appointments need to be rescheduled. No one can open a new account. Account holders without direct deposit cannot deposit their paychecks, creating a major inconvenience for them.

Benefits of Backup Power For Banks

While bank services are not life-critical, people rely on banks for their financial needs daily. Business continuity is vital for customers and bank branch owners. Banks can greatly benefit from a business standby generator because they can be open even during a power outage.

More importantly, having that much cash and financial information on hand puts banks at a higher risk for theft and security breaches if the power goes out. When the power goes out, people may want cash on hand to feel prepared while they ride out a storm. If it’s on a payday, they will need to use bank services to allocate their funds. Others may need to apply for a loan, or even get that bucket of change counted and cashed in. If current or potential account holders can count on you even in a power outage that means stronger loyalty from your customers.

Products for Every Business

Generac understands that every business is different. We have products that will work well for banks. Generac knows that banks need computers, ATMs, and other financial services equipment to stay open in an outage. South Shore Generator in Wareham, MA can help you find the right size and with installation. Contact us. 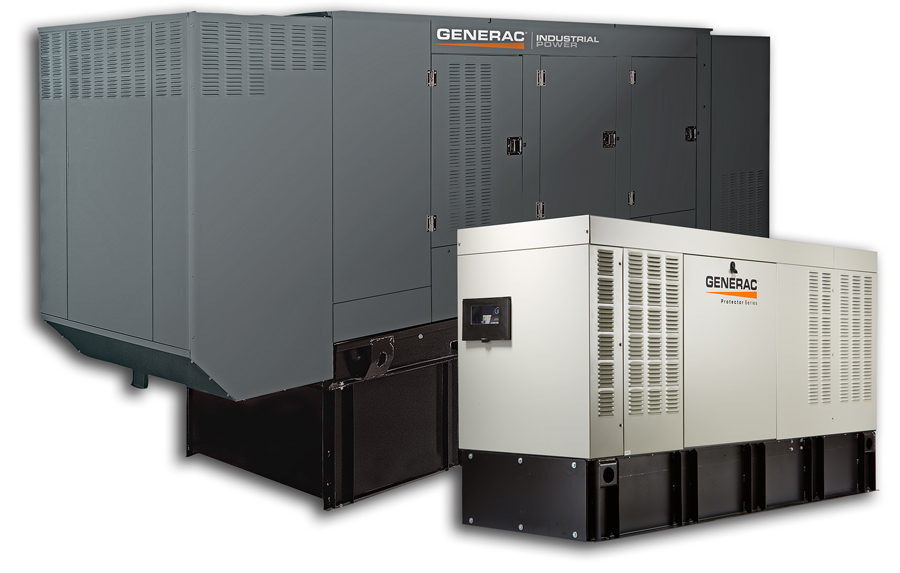 Diesel generators require constant care. With engine requirements for low-sulfur diesel fuel, the fuel now needs to be reconditioned every 12-16 months to ensure stability and ease of flow. This fuel requirement, along with the maintenance of the exhaust after treatment system, requires an experienced facility manager to handle this process. If you do not have this person on staff, you would need to turn to a third-party provider for the service, which will add cost. It will also require the rental of a backup generator during servicing when not using a MPS solution.

To reduce the maintenance burden, many short and long-term care facilities are turning to natural gas generators, as they need little maintenance. They are also eco-friendly with fewer emissions and a smaller carbon footprint.

Generac has more than five decades of experience in working with health care facilities—it’s one of the reasons we have expanded our product line to meeting ongoing needs. We have added large kW diesel generators to meet growing power needs. At the same, we developed innovative natural gas and bi-fuel generators, providing longer runtime to meet code requirements as well as provide extended protection for patients, staff, and visitors.

South Shore Generator can offer support during every part of the process from sizing to specifications to design and installation. Your patients and staff depend on you. Contact us. 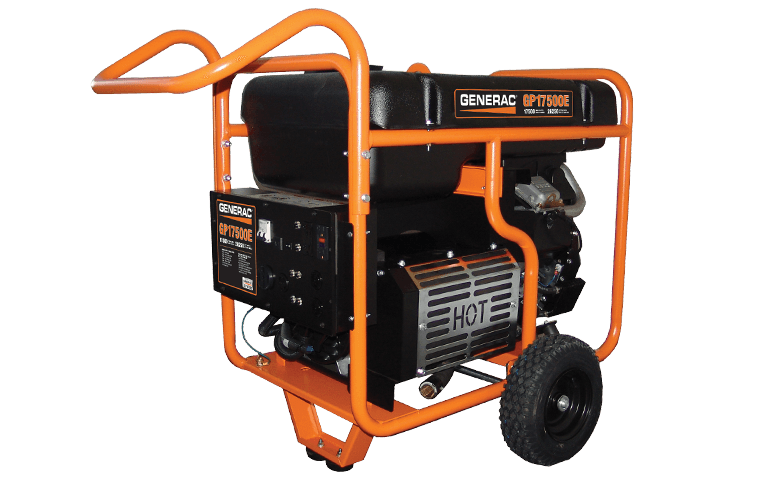 Be ready for hurricane season. Today you can determine your personal hurricane risk, find out if you live in a hurricane evacuation zone, and review/update insurance policies. You can also make a list of items to replenish hurricane emergency supplies and start thinking about how you will prepare your home for the coming hurricane season. If you live in hurricane-prone areas, you are encouraged to complete these simple preparations before hurricane season begins on June 1. Keep in mind, you may need to adjust any preparedness actions based on the latest health and safety guidelines from the CDC and your local officials. 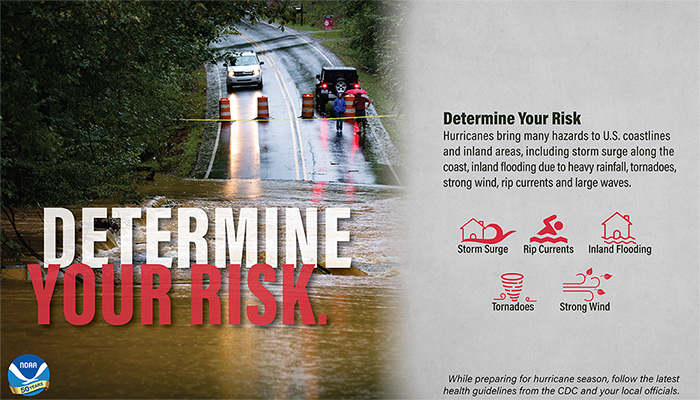 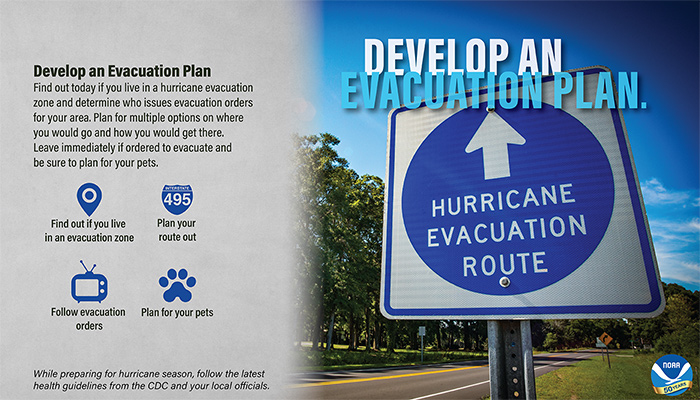 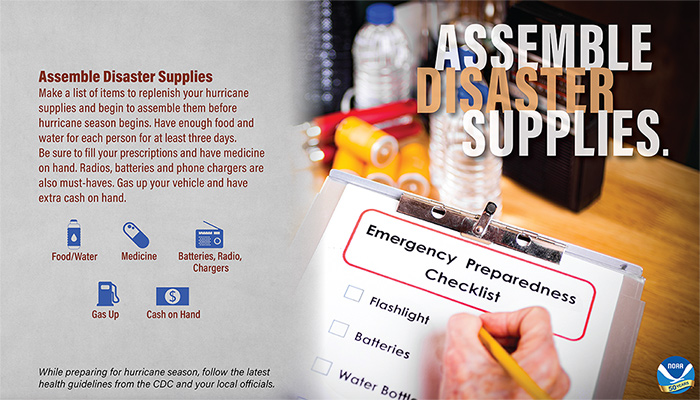 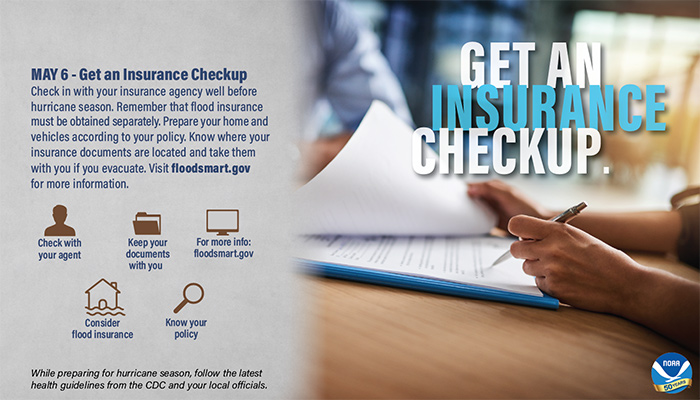 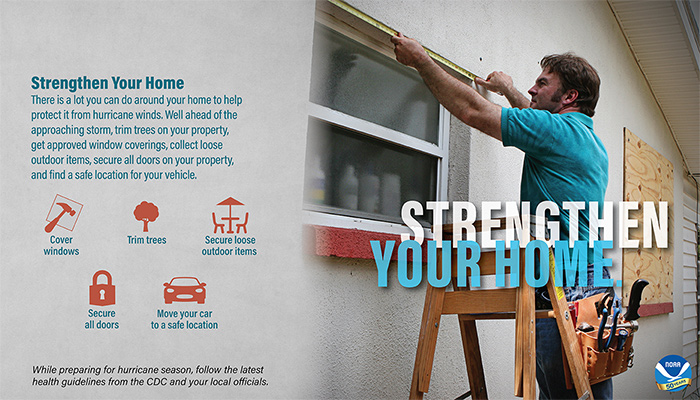 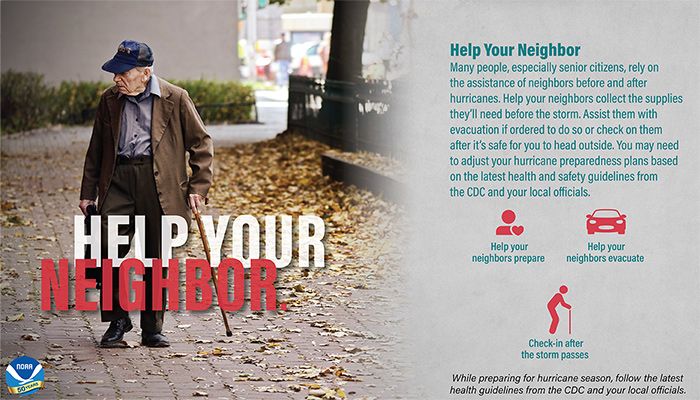 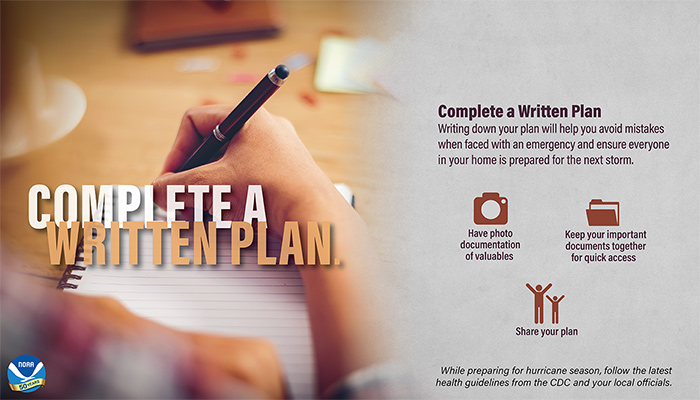 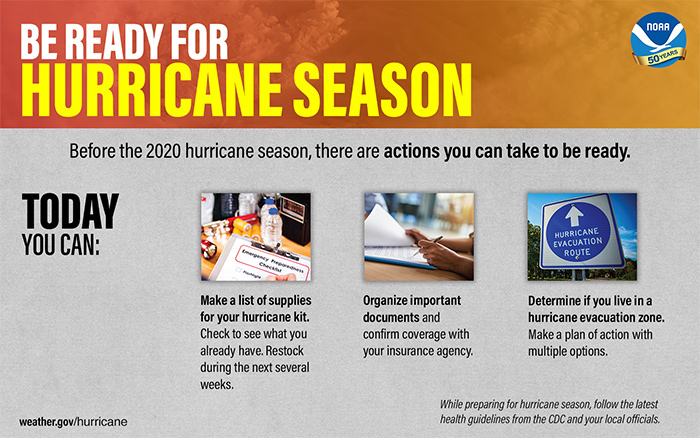 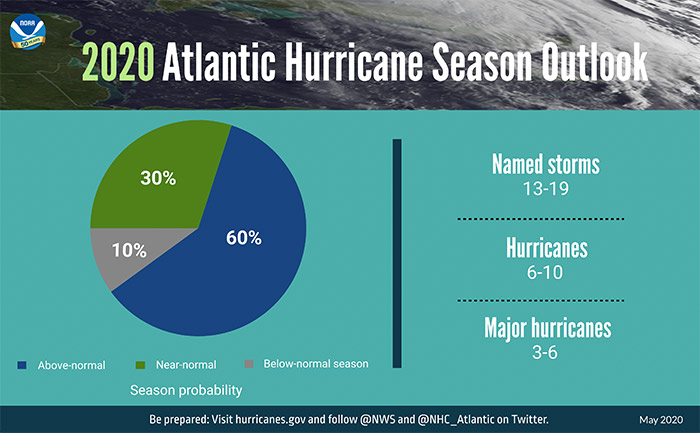 “As Americans focus their attention on a safe and healthy reopening of our country, it remains critically important that we also remember to make the necessary preparations for the upcoming hurricane season,” said Secretary of Commerce Wilbur Ross. “Just as in years past, NOAA experts will stay ahead of developing hurricanes and tropical storms and provide the forecasts and warnings we depend on to stay safe.”

The combination of several climate factors is driving the strong likelihood for above-normal activity in the Atlantic this year. El Nino Southern Oscillation (ENSO) conditions are expected to either remain neutral or to trend toward La Nina, meaning there will not be an El Nino present to suppress hurricane activity. Also, warmer-than-average sea surface temperatures in the tropical Atlantic Ocean and Caribbean Sea, coupled with reduced vertical wind shear, weaker tropical Atlantic trade winds, and an enhanced west African monsoon all increase the likelihood for an above-normal Atlantic hurricane season. Similar conditions have been producing more active seasons since the current high-activity era began in 1995.

“NOAA’s analysis of current and seasonal atmospheric conditions reveals a recipe for an active Atlantic hurricane season this year,” said Neil Jacobs, Ph.D., acting NOAA administrator. “Our skilled forecasters, coupled with upgrades to our computer models and observing technologies, will provide accurate and timely forecasts to protect life and property.”

This year, as during any hurricane season, the men and women of NOAA remain ready to provide the life-saving forecasts and warnings that the public rely on. And as storms show signs of developing, NOAA hurricane hunter aircraft will be prepared to collect valuable data for our forecasters and computer models.

In addition to this high level of science and service, NOAA is also launching new upgrades to products and tools that will further improve critical services during the hurricane season.

NOAA will upgrade the hurricane-specific Hurricane Weather Research and Forecast system (HWRF) and the Hurricanes in a Multi-scale Ocean coupled Non-hydrostatic model (HMON) models this summer. HWRF will incorporate new data from satellites and radar from NOAA’s coastal Doppler data network to help produce better forecasts of hurricane track and intensity during the critical watch and warning time frame. HMON will undergo enhancements to include higher resolution, improved physics, and coupling with ocean models.

As the hurricane season gets underway, NOAA will begin feeding data from the COSMIC-2 satellites into weather models to help track hurricane intensity and boost forecast accuracy. COSMIC-2 provides data about air temperature, pressure and humidity in the tropical regions of Earth — precisely where hurricane and tropical storm systems form.

Also during the 2020 hurricane season, NOAA and the U.S. Navy will deploy a fleet of autonomous diving hurricane gliders to observe conditions in the tropical Atlantic Ocean and Caribbean Sea in areas where hurricanes have historically traveled and intensified.

As with every hurricane season, the need to be prepared is critically important this year. 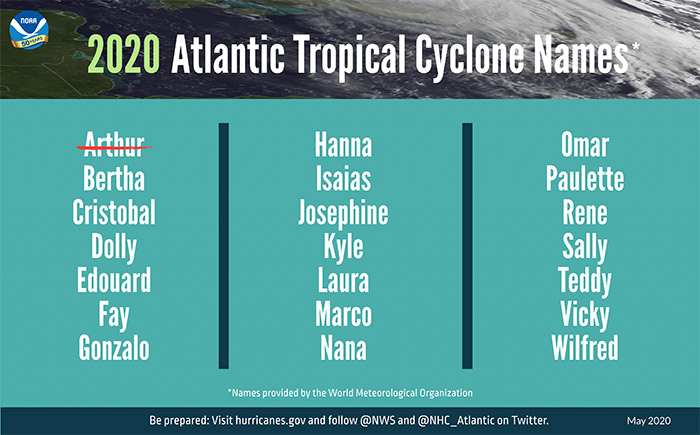 A summary graphic showing an alphabetical list of the 2020 Atlantic tropical cyclone names as selected by the
World Meteorological Organization. The first named storm of the season, Arthur, occurred in earlier in May
before the NOAA's outlook was announced. The official start of the Atlantic hurricane season is June 1 and runs through November 30.

“Social distancing and other CDC guidance to keep you safe from COVID-19 may impact the disaster preparedness plan you had in place, including what is in your go-kit, evacuation routes, shelters and more. With tornado season at its peak, hurricane season around the corner, and flooding, earthquakes and wildfires a risk year-round, it is time to revise and adjust your emergency plan now,” said Carlos Castillo, acting deputy administrator for resilience at FEMA. “Natural disasters won’t wait, so I encourage you to keep COVID-19 in mind when revising or making your plan for you and your loved ones, and don’t forget your pets. An easy way to start is to download the FEMA app today.”

NOAA’s outlook is for overall seasonal activity and is not a landfall forecast. The Climate Prediction Center will update the 2020 Atlantic seasonal outlook in August prior to the historical peak of the season.

Hurricane preparedness is critically important for the 2020 hurricane season, just as it is every year. Keep in mind, you may need to adjust any preparedness actions based on the latest health and safety guidelines from the CDC and your local officials. Visit the National Hurricane Center’s website at hurricanes.gov throughout the season to stay current on any watches and warnings. 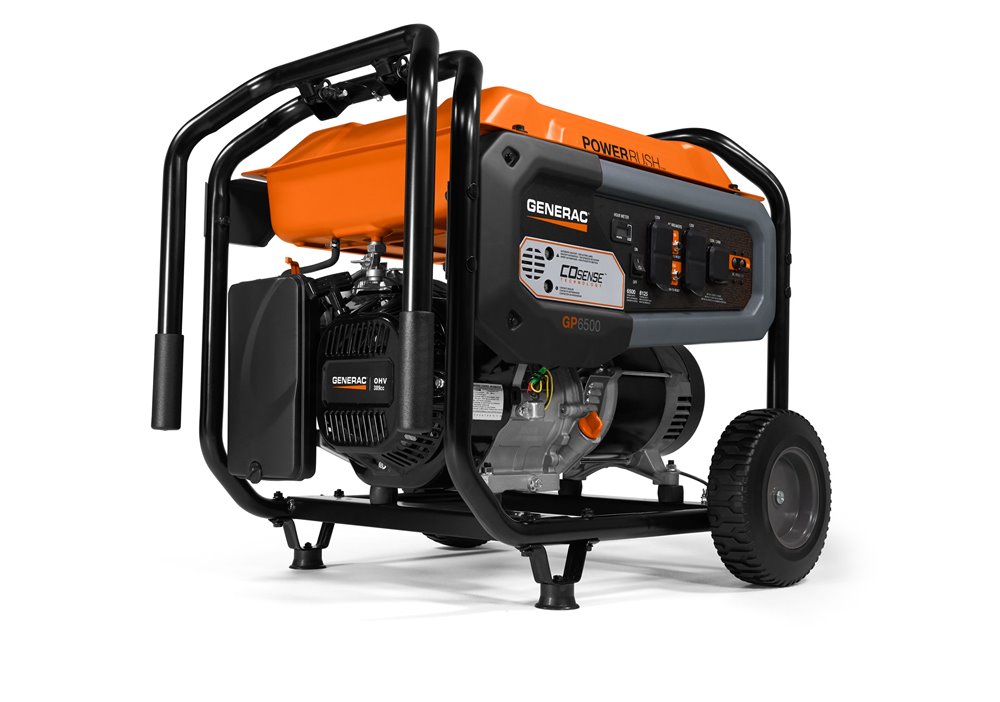 Generac’s GP6500 portable generator offers PowerRush™ Advanced Technology, which delivers more than a 40% increased starting capacity* allowing you to do more with less. Generac’s OHV engine and large-capacity steel fuel tank ensures extended engine life and run times, while the steel tube cradle provides added strength. The low-oil feature protects the generator from damage. The GP6500 can be easily transported across rough or difficult terrain with the heavy-duty wheels and easy fold-down handle. Even maintenance is a breeze, with the hour meter keeping track of necessary upkeep at regular intervals.

Featuring PowerRush™ ADVANCED TECHNOLOGY – Delivers over 40% more starting capacity allowing you to do more with less.

Large-capacity steel fuel tank with incorporated fuel gauge provides durability and up to a 10.5 hour run-time at 50% load.