Historic Hurricane Data Give a Warning for the Future - Wareham, MA 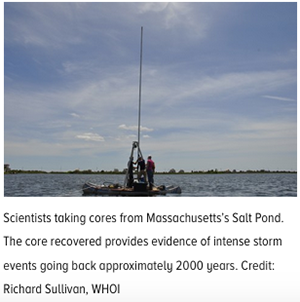 Sediment cores from a Massachusetts pond help suggest that as ocean temperatures rise, the occurrence of severe hurricanes along North America's Atlantic coast will increase.

The climate is definitely warming, but how the increased temperatures will impact the frequency and severity of hurricanes in the northern Atlantic Ocean remains a subject of debate. Scientists attribute this uncertainty to a lack of long-term historic data that would allow researchers to document how storm prevalence and intensity responded to analogous periods of warming in our planet’s history.

However, in a new study, Donnelly et al. analyzed layers of sediment taken from Salt Pond in coastal Massachusetts to construct a record of hurricanes that could be compared to historic sea surface temperature data. Lake and pond sediment can provide a valuable record of past storms as flooding events will wash foreign sand and gravel from adjacent beaches into a body of water, creating a layered record of extreme weather events.

Salt Pond provided the team with a record of 2000 years of Earth’s climate with a resolution of around 1 year. Their analysis shows that considerable variability occurred over this period and that 35 layers of sediment corresponding to intense hurricanes were deposited over the past two millennia.

Comparisons with other data sets show that hurricanes buffeted the coast of the western North Atlantic during much of the first millennium C.E. when the tropical Atlantic hosted warmer than usual sea surface temperatures. These data also show that a geographic shift in hurricane landfalls from the Caribbean and Gulf of Mexico to the North American eastern coast occurred around 1400 C.E., followed by a particularly intense period of activity between 1400 and 1675 C.E.

The team speculates that this shift may have been driven, in part, by increased sea surface temperatures off the East Coast of the United States. The team concludes that increased climate warming caused by humans may increase storm intensity and frequency over the western North Atlantic. (Earth’s Future, doi:10.1002/2014EF000274, 2015)