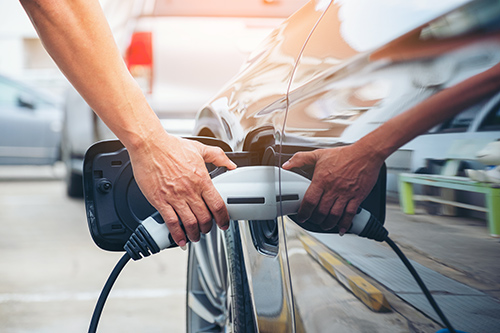 California is suffering from a collection of naturally-occurring hazards. Extensive droughts have affected the state considerably, leaving many local government leaders to issue energy-conservation notices. As the Labor Day weekend begins, traffic will be even more troublesome than ever for California cities. The state is suggesting that locals don’t use their electric vehicles over the weekend since excessive charging might hinder the state’s power grid.

This issue comes merely a week after California passed a bill that would eventually eliminate the sale of gas-powered cars. Now that the state is in an energy and resource crisis, using electricity to charge cars may interrupt California’s entire power grid. Alongside the ongoing drought, a heatwave is expected to occur in the state, forcing many to use their electricity to power their AC units. If millions of AC units extract too much energy, then immense pressure will be put on California’s power grid. To avoid a complete shut-off, the state urges those to refrain from electric-car charging during the Labor Day weekend.

The California Independent System Operator issued an advisory about restricting maintenance operations between August 30th and September 6th. This ensures that generators and transmission lines are all working properly as California residents start using excessive electrical amounts to power their air conditioning. The state’s ISO will also have alerts for residents to remind them to conserve their energy, though this might be difficult in a prolonged heatwave.

California ISO will send messages through Flex Alert to encourage people to reduce their energy usage. When a Flex Alert occurs, residents will be notified to conserve their electricity between 4 pm and 9 pm. Mid-day to evening is the most active time for California’s power grid, so the advisory would only last between those two times of the day. This advisory lasts into the nighttime to ensure that solar power can also be conserved since there’s less solar energy available later in the day. A Flex Alert will not be a mandatory instruction but an encouragement to guide Californians to help relieve stress on their state’s power grid.

What should California residents do when they receive a Flex Alert? The California ISO would like people to focus on their air conditioners first. Start by turning the thermostat up to 78 degrees or higher to avoid excessive use of their AC units. The alert will instruct those with EVs to avoid charging said vehicles as well as avoiding using any large electrical appliances. The easiest way to help conserve energy is to turn off all unnecessary lights like lamps or overhead light fixtures. If people can avoid using electricity during the daytime, that’ll significantly help overall energy conservation.

Though it’s essential for every American to think about energy conservation, some California residents are frustrated by the mixed messages the government has been releasing. Many point to the recent implementation of the electric-car bill that wants to ban the sale of gas-powered cars by 2035. If anything, the hypocrisy in government messaging shows how far the United States must go to change a power system that relies heavily on gas, oil, and other finite resources.