When home improvements offer the most bang for your buck - Warenham, MA

Remodeling tends to pick up as the weather improves, and this year is no exception. During the second half of 2013, the National Association of Home Builders' Remodeling Market Index, which measures how busy contractors are, was at its highest level since the spring of 2004.

When the report was released in late January, remodelers were expecting an even busier spring, with more saying they had been called to bid on a job or were already committed to a project.

Which home improvement projects pay off? 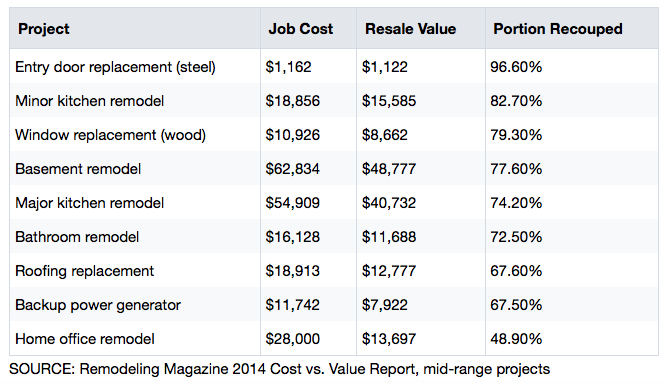 If you're updating your home with the aim of adding to its value, tread carefully. Some improvements boost value more than others, and in most cases, a project costs more than it adds in value.

According to Remodeling magazine's 2014 Cost vs. Value report, the average portion of cost recouped is 66.1 percent. (Watch the video below for some of the projects, small and big, that provide good value.) Of course, what buyers will think of—and might pay for—an upgrade is less of a hurdle if you plan to enjoy your fancy new kitchen or master bath for years to come.

How much you can expect to spend varies not just by project, but also where you live. Location will have an impact on materials, labor costs and trends.

In New York City, the average living room revamp costs an average $19,297, according to home inspiration site Houzz.com's Real Cost Finder. In Portland, Ore., it's $11,573, and in Louisville, Ky., $7,995. Shopping around for a contractor—with care to find ones with positive referrals—can help cut the cost.

Shoppers who are DIY-ing smaller projects should also check for seasonal credit card rewards. Discover's quarterly bonus from April to June awards 5 percent back at home improvement stores. Over the same period, Citi Dividend offers 5 percent on home and garden stores in general and Home Depot specifically, and Chase Freedom, for Lowe's.

Watch out for the caps on rewards earned: Discover, for example, eliminates the bonus after $1,500 in qualified purchases, for a maximum rebate of $75. Still, that's like getting two gallons of paint for free.

One of the better returns on home projects is investing on backup generators. Find the best backup generator to your specific needs on-time and within your budget, contact South Shore Generator.