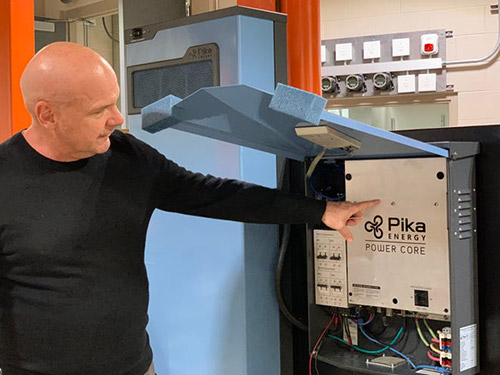 If you're a homeowner, the next energy-minded purchase you make from Generac might have nothing to do with its namesake product.

In 2019, Generac Power Systems experienced a particularly busy 60th birthday as it made a clean start for its next six decades, piecing together recent acquisitions in what it hopes will be a highly marketable product line beginning in 2020.

Instead of generators, Generac is shifting at least part of its focus to "clean energy," specifically one built on solar energy combined with what its says is cutting-edge battery technology.

The focus remains on homeowners, however.

For those accustomed to thinking of Generac — a name derived from its generators producing alternating current, or A.C. — as the maker of emergency generators, the change might seem surprising. But the Genesee-based company certainly isn't abandoning its most traditional product and it still has power in mind, albeit in a "cleaner" form, at its global center.

Inside those world headquarters in September, it formally launched an idea far different than its traditional business base.

In recent months, Russ Minick, Generac's marketing chief, has heralded the company's future by highlighting a clean-energy initiative: solar energy, stored in batteries with more substantial capacity than anything yet marketed to domestic homeowners.

"We had been thinking about what do we do beyond this emergency power approach in all of our businesses," said Minick, credited as heading the clean-energy product division.

The initiative, admittedly counter to Generac's fossil-fuel-oriented product line, is driven by domestic changes which have only just begun.

"How power is delivered to homes and businesses in the United States is going through quite a revolution now," he said. "The original (concept of building) a giant coal-burning power plant and running wires everywhere is quickly being replaced by natural gas as the fuel. ... But (experts) call it the 'bridge fuel,' because the renewables are comingin ."

Yes, wind power plays a role, and Generac believes natural-gas-powered generators will find a place in the next 60 years. But solar power has rapidly gained ground through technology advancements, Minick said.

So Generac, which had initially considered its own product line, decided to invest in the technology through key acquisitions — specifically, Neurio Technology Inc. and Pika Energy — in spring 2019.

Neurio, founded in 2005, developed hardware and software systems to help manage and operation powers systems, include solar and batteries. Pika, founded in 2010, was a cutting-edge battery developer and product company.

Together, Minick said, they form the basis for a home-based power system with improved capacity to use the energy produced by the sun and store it for use in the hours when the sun is below the horizon.

"Our initial focus is on the residential setting," he said, acknowledging the company also is keeping the commercial and industrial sector in sight. "The promise would be is that I get home from work at 6 o'clock tonight, my house automatically disconnects from the (power) grid and I run my life from 6 at night to 6 in the morning from stored sunshine."

How soon before it all happens. As early as mid-2020, Minick said.

Aaron Jagdfeld, Generac's president and CEO, said in a statement that his company carries both the experience and technology to deliver on these high expectations.

The renown generator manufacturer began the year by announcing its plans to celebrate its milestone anniversary. Concurrent with its celebration, Generac completed the conversion of its former production facilities into its world headquarters, which employees nearly 1,000 of its 5,700 workers globally.

Generac maintains a big presence in the town of Genesee, where the walls of the one-time factory have been a familiar sight since the late 1960s, as the business grew.

The business started by Robert Kern in 1959 inside a dairy barn in Wales was soon making generators for Sears, Roebuck and Co. under the now-renown Craftsmen brand name, at its new Genesee factory — often called its Waukesha plant by virtue of the ZIP code its shares with its municipal neighbor."Generac is well positioned to be a key player in the clean energy market," Jagdfeld said. "The company’s expertise in power generation combined with the technologies under development will be used to modernize the way consumers will generate, store and consume their own power. This in turn will create the opportunity for significant energy cost savings while also providing potential relief from increasing power outages."

Customers have been mostly homeowners in the market for emergency power backup generators, but Generac's product line has also served light industrial businesses and other commercial interests.

The site of the current factory was destroyed in a fire in the late 1960s, but was quickly rebuilt — so quickly that Minick said Kern, who still lives a stone's throw from Generac, occasionally ribs him about how long it took to convert the facility over a six-year span.

"As we were going through these phases of remodeling, every so often he would stop in and tell us after the fire that burned to the ground, he was making products within two weeks, so why is this remodeling taking so long."

Another critical outlet was backup power for cell towers, itself a tall task but do-able for the longtime generator firm. Minick expects that market to become even more critical for the company as 5G networks take hold and cell providers became even bigger players in the modern data and communications market.

"We're positioned to be an important part of 5G," he said, agreeing with scenarios that suggest those cell networks will largely replace Wi-Fi. "The internet and 5G is colliding now. If your Tesla is going to self-drive, you better have 5G working, and it better be working all the time."

Combined with the clean-energy initiative, Generac may become known as a different kind of company, but not completely.

"We're still all-in on emergency power backup, but these are growth areas for us," Minick said.

Facility for the future

But, in terms of actual production, it will be produced elsewhere — whether at company-owned or partner production facilities in Europe, Latin America or Asia, or domestically (including Wisconsin) in the U.S.

By 2011, the now-publicly traded company decided that production at the Genesee location didn't fit the company's long-term plans. That's when a massive remodeling effort began.

Minick, who joined the company that year, was around the see each phase of the transition, which essentially replaced a blue-collar factory with cutting-edge research and development facilities. In addition to executive offices overseeing global operations, the site now includes a lab and technology center, extreme product testing and three-dimensional printing for various product designs.

"The whole back of this thing is really cutting-edge labs," he said. "We can freeze stuff, heat stuff, shock stuff — you name it. We can do extremes to every component in our product here."

Minick said the building kept aesthetics in mind, creating an attractive plant that, among other things, hopes to gain technology experts through strategic recruitment.

"Recruiting technical people is hard these days, particularly in Milwaukee," he noted. "I mean, if you could show a track record of innovation and good tools and facilities to help drive innovation, product engineers love that."

And employees in general appreciate other niceties, such as the gymnasium that's also part of the former factory, he added.

With the transition complete, the focus among those engineers within those walls will be to further develop the clean-energy products, for which Minick said there is an ever-growing market.

Jagdfeld agreed, further suggesting that traditional power suppliers can't be relied upon as they have been in the past.

"Our move into clean energy technologies such as energy storage is a natural next step for Generac," he said. "We believe the energy landscape will change dramatically over the next decade as utility rates continue to rise, the grid continues to be less stable, and regulations driving renewable energy continue to increase."