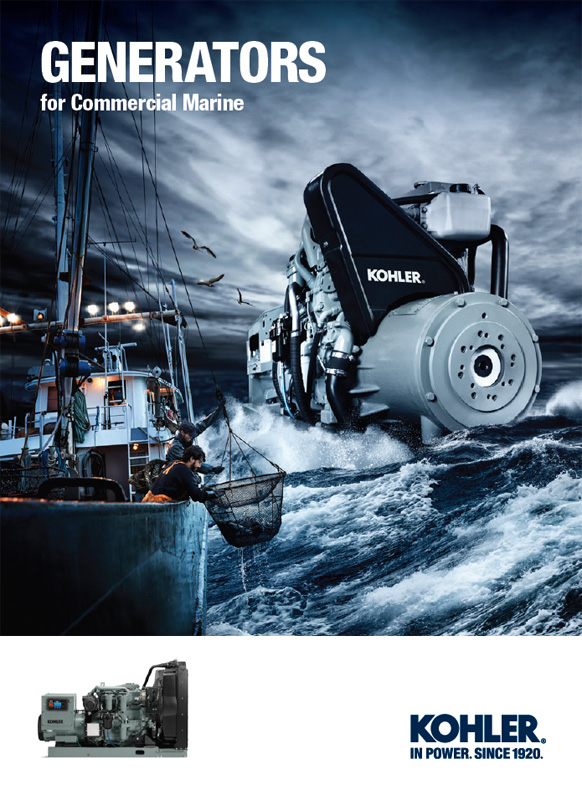 Kohler created the world’s first commercial marine generators with factory installed, pretested paralleling controllers and automatic voltage regulators. Everything is automatic and easier to use than ever before.

The Decision-Maker 3500 is compatible with existing systems, so repowers are easier than ever. When wired for V-bias/S-bias inputs or droop, it can parallel with existing load-share modules for even more installation options.

Monitor and control your generators from your boat’s existing monitoring system. Or enjoy a more comprehensive experience with generator-specific monitors from Kohler.

Nearly every component is designed, built and serviced by Kohler. Just the way it should be.

It's all about your bottom line.

At the end of the day, all we care about is boosting your business. It’s that simple.

That’s why we created the Decision-Maker® 3500 controller. It eliminates the need for expensive, oversized switchgear, costly add-ons and complicated installations. Which means you save big on cost and space. Not only that, our new controllers feature auto-transfer functionality. If one generator is in trouble, the second generator senses the problem, starts up and takes on the load—automatically. You won’t lift a finger. Your boat will never be dead in the water. And you can keep your business in business.

We are a company of craftsmen guided by a single purpose: quality. Every KOHLER commercial marine generator is extensively quality-tested start to finish—before model release and before leaving the factory. The result is proven reliability.

We cover the first year, with the option to extend to three years.

Generators for Boats: What to Look For? Wareham, MA 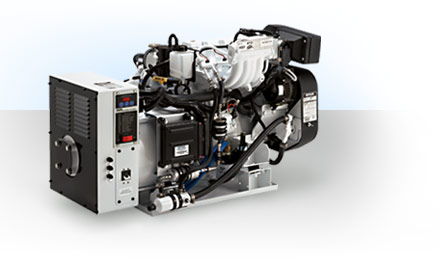 Inverters change the DC power of the boat's batteries into AC power. They're compact and quiet but limited in output by the size of your bank of batteries and by the alternator's ability to keep up with the draw. Battery capacity should be at least three times the expected need between charges. Use inverters for short-term items such as coffeemakers and microwaves. Boats without air conditioning and loads in the 1,000-to-3,500-watt range can get by with inverters. However, for greater and longer power demands you will need a generator.

Match the generator's fuel needs with those of your main engines so you won't need a separate tank, necessitating extra trips to the fuel dock. Diesel is more expensive than gas but also more efficient. If you're buying a gas generator, it must be spark-free to avoid explosions. Also, you'll need to install extra cabin CO alarms.

A generator will come to its designed voltage and frequency-60Hz in the United States and Canada-at a preset speed. For most generators, this will be at either 1200, 1800, or 3600 rpm. The 1200 models are large and heavy, and rarely used on pleasure craft. The 1800-rpm models are the most common. They're inexpensive, fuel efficient, quiet, and dependable. A 3600-rpm model might provide more power in a smaller and lighter package, but its high-revving design increases noise and decreases longevity. Consider adding the manufacturer's sound enclosures to minimize sound levels with a 3600-rpm unit.

Hydraulic-drive generators are powered by a hydraulic pump on the main engine. The engine must be running to produce electricity. They're less expensive than self-powered models but are only suited to boats with intermittent power requirements or long-range cruisers that are under power most of the time.

A generator that is too small will consistently trip breakers, wear out quicker, and possibly damage your electrical equipment. Too large a generator can also operate inefficiently, resulting in carbon buildup on the cylinder heads, and leaving unburned fuel in the exhaust. Never run with a load of 25 percent or less of the generator's output. From 40 to 75 percent is ideal.

Most marine generators are water-cooled and can use one of three types of systems. Raw Water: Least expensive. This system circulates raw sea water through the engine. As a result, potential corrosion and contamination problems make them a poor choice for marine use. Heat Exchanger: Most common. Cool raw water is taken from outside the hull and continually passed over a series of coils that are part of the engine's closed freshwater cooling system. Only parts exposed to the raw water are vulnerable to excessive corrosion or contamination. Keel Cooled: This completely sealed freshwater system, foregoes the seawater cooling circuit, opting instead for the closed-loop, water-jacket circuit. A pump to move the coolant through a cooling grid located on the bottom of the boat. This keel cooler must be separate from the main engine's grid.

Look for all common maintenance points, such as the dipstick, filters, and both oil and water fills, to be on one side of the generator body so they'll be close at hand.

These reduce engine noise, but make access for maintenance difficult. Look for ones with removable panels so you don't have to remove the whole cover to do a small job.

Make sure the unit will shut off automatically if there's low oil pressure, high coolant temperature, loss of coolant flow, or high exhaust temperature in a wet exhaust system.

Best Marine Generators Will not Leave You Powerless During Emergencies on Board - Wareham, MA

Following the boat main engine, the most expensive single piece of equipment aboard is often the marine generator. Purchasing a generator set for use onboard a boat is a practical and important investment. In order to ensure that you have the best marine generator for your boat, making this purchase through an expert who can analyze your requirements carefully is crucial.

When looking for the best marine generators, qualities to look for are reliability, longevity, and the ability to deliver a comfortable ride onboard. Consider the basic and unique requirements of your boat in order to more easily choose a generator that can safely and effectively provide temporary power solutions when an emergency occurs at sea.

Marine generators in Wareham, MA come in different sizes, configurations, and capacities. Regardless of the size of the boat, you can be confident that the right power-generating equipment is available for it at South Shore Generator. For use in normal marine environments or for those harsher conditions where there are heavier currents, you can be confident that the marine generator you purchase will not leave you powerless.

There are many different reasons for requiring marine generators in Wareham, MA. But what remains important is that you purchase a marine generator only once you understand how it works and after completely checking whether the generator will meet your basic and unique requirements. Here are some tips that can help you in your search for the right generator for your boat.

To find out more about the best marine generators in Wareham, contact South Shore Generator.

Having the best marine generators from industry leaders such as Kohler, Nor’Pro, and Westerbeke gives boaters the freedom to sail and anchor wherever they want. These marine generators are especially designed to operate in a wet environment and can still be used during a foul weather.

Marine generators in Wareham, MA have advanced fuel technology and system configurations that allow recreational boaters to cruise farther and safer. Whether you enjoy a day cruise with your family, enjoy sport fishing around the islands, or are taking a long excursion, it is wise to have marine generators in place that promise a smoother, quieter, safer ride. With the best marine generators in place, you can be confident that you will have sufficient back-up power for any boating application.

In addition to the standard features, marine generators are also loaded with benefits from the state-of-the-art controls, fast-response voltage regulators, and user-friendly diagnostic systems. They are strategically engineered to function at optimum performance with minimal sound and vibration. Designed for compliance with coastguard regulations, they can also be complemented by a full line of accessories to suit your specific application.

For more details about the best marine generators to meet the demands of recreational boaters, contact South Shore Generator.

Marine generators in Wareham, MA are used exclusively for residential and commercial marine applications. The main purpose of these diesel-powered generators is to keep marine craft in full operation even during downtime.

The available marine generators come in different power load capacities. However, even if they are able to produce large kW of power, these generators are still safe to use because they remain compliant with the latest CO emissions requirements. They are often fitted with a sound housing or a remote exhaust silencer for remarkably quiet operation which makes them ideal and helpful to all recreational boaters.

During a power outage, being on the water is hard work. For this reason, it is advisable to have the best marine generators in place. It is important to make sure that you only use marine generators that are engineered to perform in the most demanding environmental conditions. These generators also come with external connection points for easy installation and maintenance so you can have the emergency backup power right when and where you need it. Marine generators will keep the current flowing to all of your electrical equipment on your boat.

There are some marine generators that are smaller in size but that are big on performance. They are configured this way so they can fit perfectly in both cruisers and sport boats. They also having cooling mechanisms so they do not overheat while providing you with the power you need to boat safely.

To find out more about the large selection of marine generators from top manufacturers, contact South Shore Generator.